A reader of the last article on booms said that it was a bit inconclusive: he was trying to size a boom and couldn’t. So before I move on to the details of boom fittings, here is a little guidance. There is a helpful table in the most recent edition of Skene’s Elements of Yacht Design which gives sizes geared toward Bermudan yachts, so you may need to be careful about using it exactly. Alternatively, there is a rule of thumb which says that the boom, at least at the gooseneck end, should be around 65-75% of the mast diameter. How do you know what the mast diameter should be? Well, try the guidelines suggested in the second masts article which gave a consistent set of answers by a variety of methods. Alternatively, if your mast is OK in service, use that diameter!

After that brief interlude, back to fittings. First off, goosenecks. Why are they called goosenecks? Well, the original versions looked just like that and they did fine for the relatively low stress application of predominantly downwind rigs. As more close-winded rigs developed, so too the need for the gooseneck to be robust increased.

A good arrangement is shown here and comprises the following features.

Firstly, the mast attachment is via two bands. This helps to spread the load applied to the mast. Except

on small – say less than 16′ (5m) craft – a single gooseneck band can rock up and down damaging the mast. I know there are plenty of examples in existence but if you are starting from scratch, you may as well go for a good arrangement. Secondly it is preferred that the bands be clamped to the mast rather than screwed. This is for two reasons. The largest sideways forces usually come from the shock loads of a gybe and it is useful for the whole assembly to swivel a bit under extreme loads rather than break. The other reason is that you don’t want to reduce the strength of the mast near the middle of an unsupported panel and the holes for screw fastenings can allow water in.

Thirdly, the boom is held between two straps. Other than for the smallest boats, a spike up the end of the boom style of attachment is not really favourite. Such an arrangement can split the boom, and even if it doesn’t, you have a lovely place for water to collect and start rot. The other snag with the spike style of things is that the boom is not positively fixed to the mast. It is possible for the boom to become detached, with a variety of possible effects. Many years ago I was lucky to avoid a broken nose, or lots of broken teeth, when a boom flew off the gooseneck and back into my face, luckily hitting my upper jaw. As with gaffs, how you fasten the straps to the boom is not critical, screws, through-bolts and rivets have all been used successfully. With regard to the length and width of the straps themselves, aesthetics usually predominate over engineering. Something like 40% of the boom diameter for the width and 3-4 times the

diameter for length is a start point Lastly, the arrangement shown allows for a number of bells and whistles to be added or incorporated, which I’ll deal with in approximate order of popularity.

Roller reefing is nowadays unusual on larger boats excepting the in-boom or in-mast systems which I suspect don’t feature too highly on the wish lists of my readers. Various varieties of slab reefing are, though and it is reasonably straightforward to incorporate reef hooks into the gooseneck as per the drawing. If you wish to lead all lines aft, it is also possible to put cheek blocks on the side of the gooseneck strap to keep the lines roughly in the right place as they proceed to turning blocks at deck level.

It is possible to include belaying pins, with a few caveats. Firstly, if you make off your halyards onto them, it is important to make sure that they don’t trap the mast hoops or the side of the gaff saddle. The problem isn’t quite resolved by using lacing, since when you lower the sail, the inevitable loops that develop have an unerring ability to hook over the ends of the belay pins at awkward moments. Finally, the pins can do a great job of snagging foresail sheets, again at the most opportune moments.

There are moments when I cannot believe how many people sail on the Broads or through the French canals but the requirement to accommodate mast lowering is remarkably frequent. How to do it? Option 1 is to arrange the gooseneck such that the vertical pin can be removed easily, so releasing the entire boom with all reefing lines. This works fine on smaller craft with luff lacing. Option 2 is to leave all the sail rigged and lower the mast. In this case, you need a sizeable offset between the after face of the mast and the horizontal pin of the gooseneck to allow the bundle of the sail to fit once the mast is parallel to the boom. If you leave the sail up, this isn’t so much of a problem. If the gooseneck is mounted on a tabernacle, you have to worry about the vertical distance between the gooseneck attachment and the pivot point; 6-8″ (150-200 mm) or so usually does the trick, which is more than you might expect.

Arranging for a Spinnaker Pole

It’s relatively unusual but this can be done by mounting a spinnaker pole end on a universal joint on the forward upper band. This is good if the pole is short enough to gybe through the nearest forestay and also if you envisage stowing the pole ahead of the mast. Alternatively hoops can be fixed to the forward part of the gooseneck band, with the proviso that one ring can be difficult to reach and may snag foresail sheets, and that two rings mounted ’10 minutes to 2′ fashion may be easier to reach but will probably catch twice as many foresail sheets.

What about the Clew End?

Well, your needs are going to comprise something to attach/tension the clew of the sail, something for the mainsheet block or blocks and some topping lifts and reefing lines. Let’s start with tension. Whether your sail is laced to the boom or not, you need a means of tensioning the foot. If you are feeling a bit racy, you may also wish to adjust the tension as you are going along. Almost all methods incorporate two components: one to hold the clew just above the boom; the other to determine its location along the boom. I have to confess as I write this that I wonder why this should be so. If you think about boomed staysails, square sails and some mainsails designed for in-mast reefing, all of these simply attach the sail to the outboard end of the spar.

Anyway leaving that aside for a moment, locating the clew near the boom can be done with a lashing, though this makes it fiddly to adjust; with a short length of track, perhaps 12″-18″ (0.3-0.5m) long; with a slide or a short length of bar mounted along the boom, a so-called clew horse. Tensioning it is usually done with either a lashing, again difficult to adjust quickly or a clew outhaul passing around a block or sheave and running forward to some suitable point for adjustment. If you want an easy go-fast goody, the ability to reduce the tension in the foot of a gaff mainsail off the wind should give you a tenth of a knot or two, but it is best done from the cockpit or the mast. I did once see a very nice piece of kit which had a slider mounted in a track, adjusted by means of a handle at the end winding the slider on a screw thread. All good finely engineered stuff, until you start to wonder who is going to go to the end of the boom to adjust it as you go along.

The first aspect to think about here is where to take the loads. If you see any merit in the arguments put forward in the previous article, then the logic runs roughly as follows. If you have a loose footed mainsail, then the mainsheet should be attached at or near the aft end of the boom – and only there. If you have a sail laced to the boom or in a track, you may be better off distributing the mainsheet blocks along the boom, perhaps even using a centre mainsheet arrangement. But remember that when reefed using slab reefing, the sail is effectively loose footed. So a practical compromise is to mount the mainsheet blocks some 5% to 10% of boom length forward of the aft end of the boom. On a cutter rig, this puts you somewhere near the after deck and also the points at which the boom is loaded when reefed.

An often overlooked option – a pity because it is cheap and effective – is to use a wire strop around the boom for the mainsheet blocks. All you need to locate it is a small saddle or similar on the upper side of the boom. I saw an interesting variant of this idea on one of Spirit Yachts: instead of wire, a length of Velcro tape was used to attach the blocks. You get just under two boom circumferences of hook and loop contact, all in shear. So it is light, cheap, effective, easily adjustable and it doesn’t damage the boom – a good example of modern materials used in a traditional application.

If however you find such a solution somewhat aesthetically challenged, then you’ll be wanting a bail. There isn’t much to say about them, except to note that the sheet attachment must be able to cope with +/- 60 degrees either side without jamming and that the arrangement seen where the bail is simply plugged into the fitting is unsatisfactory.

Topping lifts are jolly handy, even on smaller craft and the joy of traditional rigs is that you are more or less forced into having a topping lift on each side of the mainsail. These form rudimentary lazyjacks; indeed Bermudan people are finding it so too, as evidenced by the articles in the yachtier press on how to fit them. I should say, though, that however complex these things become, they will never constitute an automatic sail stowage system. You will still need to rummage around for sail ties at embarrassing moments. It doesn’t really much matter how the things are arranged: separate lifts, double ended, single ended, adjusted from boom end or mast; all these variations work. Now if you are feeling really clever, you can incorporate all these requirements into one fitting.

And while on the subject of lacing, how to lace the sail to the boom? In such erudite matters, I defer to Brion Toss’s excellent “Rigging Handbook” from which I have also borrowed the final picture. 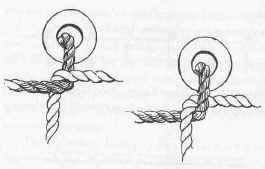 You can use a short loop for each cringle – square or reef knotted. This uses the least line and is nicely adjustable. It is also secure if one line parts. Snag is it is fiddly to do. Spiral lacing is quick and easy, but may work loose. Best bet is to use half hitching or marline hitching, shown left and right respectively in the picture. Try out half-hitching versus marling hitching and you will soon find that the latter incorporates a good deal more friction to keep the sail at the right place in relation to the boom.

All of which just leaves reefing. That’s for next time.